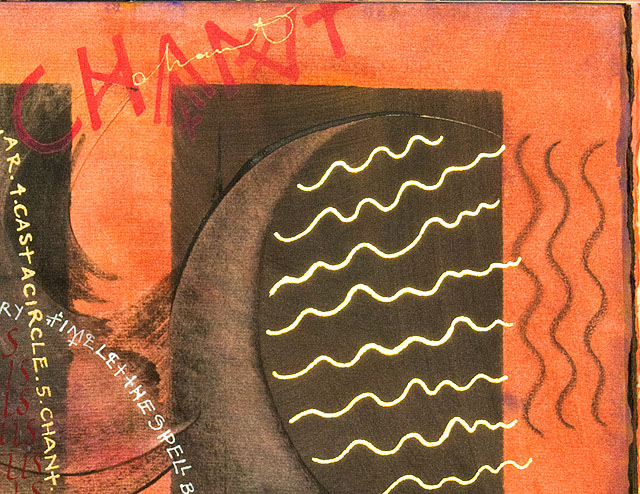 I’ve uploaded another new gallery to this site, of the three variants of my book Spelling Words. I’ve written extensively about the creation of this book elsewhere in the journal – you can follow the trackbacks at the bottom of the gallery page to read some of those posts. What I’ve probably never done is fully disclose the enormous impact a particular book had on inspiring the manifestation of this work. That book, The Spell of the Sensuous, Perception and Language in a More-Than-Human World, was written by David Abram, and his experience as a working sleight-of-hand magician (as well as a writer and philosopher) led him to travel the world in search of real, shamanic magic. His musings on the meanings of the word “spell,” a word I had been turning over in my mind like an unsolved riddle for several years already, so crystalized in my imagination that I wanted to find a way to present it visually. This eventually led me through many arcane and contemporary dictionaries and books of magic, and finally resulted in these three books. One just wasn’t enough to explore all the variations on the theme that I was puzzling out, so three it was, a magical and sacred number in itself, and then I was content, and moved on to making other books.

But David Abram continues to mine this vein and his new book, Becoming Animal, an Earthly Cosmology, is high on my soon-to-read list. I’ve read bits of it in reviews, and the following once again just knocked my socks off:

“For those of us who care for an earth not encompassed by machines, a world of textures, tastes, and sounds other than those that we have engineered, there can be no question of simply abandoning literacy, of turning away from all writing. Our task, rather, is that of taking up the written word, with all of its potency, and patiently, carefully, writing language back into the land. Our craft is that of releasing the budded, earthly intelligence of our words, freeing them to respond to the speech of the things themselves – to the green uttering forth of leaves from the spring branches. It is the practice of spinning stories that have the rhythm and lilt of the local soundscape, tales for the tongue, tales that want to be told, again and again sliding off the digital screen and slipping off the lettered page to inhabit these coastal forests, those desert canyons, those whispering grasslands and valleys and swamps. Finding phrases that lace us in contact with the trembling neck-muscles of a deer holding its antlers high as it swims toward the mainland, or with the ant dragging a scavenged rice-grain through the grasses. Planting words, like seeds, under rocks and fallen logs – letting language take root, once again, in the earthen silence of shadow and bone and leaf.”

How can this be done? I believe it is by returning to the root meaning of the word spell, the telling of a story, and the true meaning of the word “enchantment,” en-chant-ment, that we might begin to marry the word to the land again. Those of us practicing spellwork, chanting, singing to the land, talking to the animals or praying to the birds, have had a small taste of what this might be like. To be attuned to the elements, to believe that our thoughts and words have power and that the earth itself hears and responds to our love, to know and love the LIFE in everything – this is our work, and it is important that we do it. And for that we must sometimes get out of our universities and our houses and be with children, or be with people who have not forgotten the old ways, the mystics and the shamans and the magicians. Words have power; they are seeds which take root wherever we may cast them and they bring forth, they manifest, they are our creations, whether we write, sing, chant, pray, shout or whisper them, they are our uniquely human contribution to the cosmos.