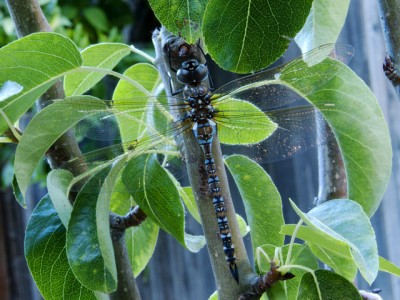 As I step away from busy days in the studio, I often go outside to recharge in the garden or by the creek. Today I stayed close to the house to monitor a sprinkler and practice my daily qigong by the pear tree we planted for my father’s memory. The slowness of these movements brought a meditative state, and in the slowing down, my eyes refocused and I suddenly saw . . . something in the leaves that was NOT a leaf. This dragonfly visitor rested quite comfortably on the tree for a long time – long enough for me to finish my stretches and finally go inside for the camera on the tripod.

Of course having these photos led me down the interweb road to lots of Dragonfly myth and story. Such a stately insect has been the source of many a tale and goes by many names. I was soon reminded of one of my favorite retellings of an American Indian story, The Boy Who Made Dragonfly, by the late Tony Hillerman. He is known more for his mysteries set in the American Southwest, but he truly loved the Indian people and this lovely story of how a dragonfly made of corn husks brought the Corn Maidens to save two children is full of wonder. The double-winged dragonfly symbol graces many handmade objects from that country. 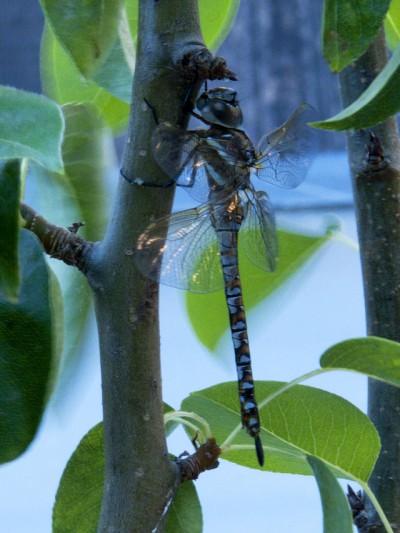 This particular dragonfly is commonly called a Yellow-Striped Hunter, Austrogomphus guerini. Here you can see the marvelous markings on the long body and the glittery wings catching the late afternoon light.

As a creature of the water, dragonfly carries water magic: the deep subconscious and the realm of dreams. Its many-colored iridescent wings confer it the quality of illusion, for the golden wings change depending on your viewing angle. It is also a symbol of transformation, rebirth and renewal, beginning life in the water and later becoming a flying creature. It has many names and stories, one being that it follows snakes and stitches up their skins, a further immersion in the resurrection mythology that attaches to this “snake doctor.” It also symbolizes acute sight; those large bulbous part of its head are its multifaceted eyes. So I imagine this dragonfly was looking at me while I was looking at it. Its appearance in my garden is a fortuitous sign, for aside from its mythological attributes, it is also a great hunter of other insects that eat my plants, and of mosquitoes!

The aforementioned camera has also been photographing new book work from the studio, which I will post soon, for those of you who follow this wayward journal for the calligraphy and book arts posts. Thank you for reading.