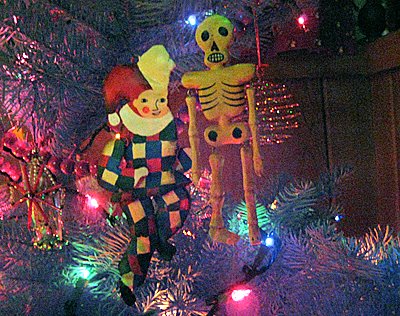 On Sunday we went to Revels. This year’s theme was the King and the Fool, with David Parr as the King and the Fool being performed by the wonderful Geoff Hoyle. As has been true in nearly every Revels since 1999 there was a 15-foot high puppet (made by Annie Hallett) which was a marvel, representing the Black Knight who comes to challenge and kill the king, who magically arises again further on in the story. The giant puppet had amazing “arms” which would disattach and fly around the stage, taking the form of ravens, symbolically a bird of death. Aside from this central story, there were beautiful medieval songs, great hilarity with a dragon who kept entering before his cue, the Lord of Misrule to preside over the 12 days of Christmas festivities, singing carols together with cast and audience, and many antics by the Fool, who often as not was hanging about with the children. The Fool’s job is to be silly and profound by turns, and say the things we cannot otherwise say or hear.

Perhaps the most poignant performance was the Danse Macabre. The Fool meets up with Death sitting on the King’s throne, and after sidling up to the skeleton and having some mimed converse, begins a heartbreakingly lovely dance with Death. The audience was completely silent, until a soft collective gasp when the Fool and Death finally dance behind the door and are seen no more. Thereafter the King returns, and speaks to the Fool the lines which could be said to sum up so much of the Revels spirit: “Who can defeat Death? Not I and not you. Only you, Fool, with mirth and merriment, can keep Death away for a little longer.” (my paraphrasing.)

The Dance of Death was a common medieval symbol, appearing often in books, paintings and church murals. Death was perhaps much closer then than it is now in our culture, when we go to such extreme lengths to avoid looking at it. Here is a beautiful woodcut by Hans Holbein, called The New-Married Lady, from a book published in 1538. Women so often died in childbirth in medieval times that this connection was seen more profoundly. Death plays a drum for her. 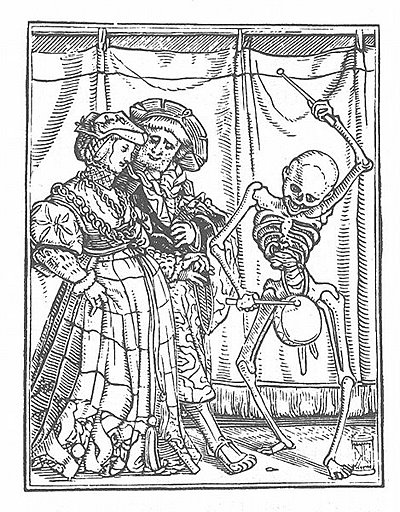 The extraordinary danse macabre I saw Sunday in Oakland was first created by Geoff Hoyle for the 1995 Christmas Revels. That year I bought these two ornaments (photo at top) in the lobby, and this year hung them on my tree together (rather than hiding the skeleton away in the far branches as in years past). I want to be reminded of the connection, at this darkest time of year as we await the sun’s rebirth. Death came near to us this year, in a few ways, just close enough to feel the cold breath. I want to sing, dance and make merry with my family and friends while I still have the warm breath to do so.

Previous post: The Longest Night; Evolution of a Greeting Card