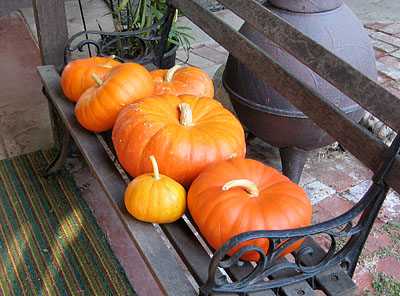 Autumn is here in full now, harvests of all kinds coming in. This is a beautiful French heirloom pumpkin called ‘Rouge Vif d’Etampes’ but is commonly called Cinderella pumpkin, because of its resemblance to the magic carriage which took her to the ball. Pumpkins are one of my favorite signs of fall, and I can still remember going to a pumpkin festival in Ohio as a kid, I think in Chillicothe, and seeing every shade of orange possible.

We are almost at fall equinox. I planted these at summer solstice, feeling a bit blue about not being able to “go to the ball” (the calligraphy conference) which prompted a great exchange on Facebook about the metaphor of the magic carriage taking me on a journey, and a lot of other silly stuff that made me feel ever so much better that day. Now it’s fall and my journey has been to visit my creekside sanctuary every day, to visit my studio which has been a hive of activity, and to be in sacred space right here where I am. Like Cinderella in the cinders, keeping the sacred flame alive.