Character, for Heart to Heart 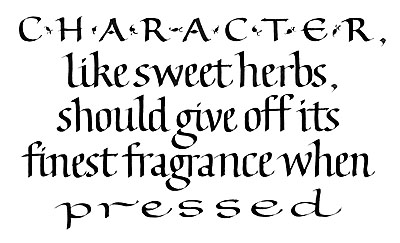 A lesson we can learn from our herbal friends: when under the greatest stress, we can still aspire to our better natures. This quotation was given to me to letter as my annual contribution to Edy Chan’s Heart to Heart wall calendar; a labor of love I’ve been participating in since 1994. Almost every year since then Edy has sent quotations out to a group of willing and adventurous calligraphers to contribute to her Heart to Heart calendar. Published in Oakland, this calendar was begun decades ago by her own grandparents, and is never for sale, but rather shared with the needy in her community, and those of us lucky enough to contribute and receive a small number to share with our own friends. Many among my own dear ones know already what is in that flat wrapped gift at Yuletide, and have fun trying to guess which of the contributions might be mine. The English calligraphy is always paired with the same text artistically rendered in Chinese calligraphy, and a smaller English quote in calligraphy fitted onto the calendar page. Edy usually also invites children to contribute (including my own daughter at age 9), so the calendar is a nice mix of world-famous and beginning calligraphers, and everyone in between. 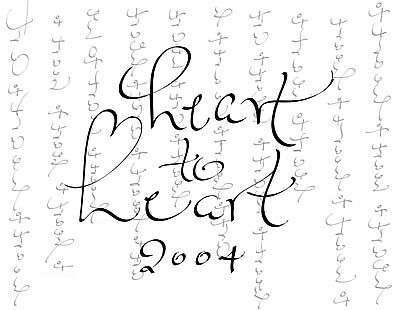 Over the years I have used this task as an opportunity to try out new and different directions with my calligraphy, and looking back over the years I can trace my development from a traditional style to more adventurous and wild letters. Edy doesn’t put any restrictions on the work; whatever we offer is gratefully accepted. In 2004, I was honored to produce the cover, shown above. Below you can see the way I did this, by using the newly-discovered tricks of Photoshop to take my own freeform calligraphy, flip it and rotate it, fade it to gray and put it behind the black title lettering. I always rather liked how this one came out, with the horizontal and vertical elements combining in an interesting way on the cover and referring to the combination of Western and Asian styles of calligraphy inside the calendar. 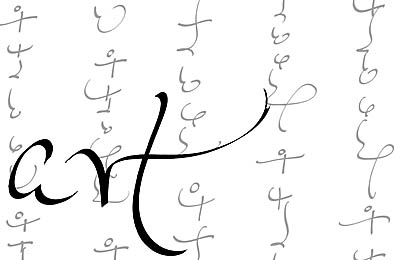 Someday I’ll dig out some of the other quotes I’ve done, to see my progression over the years. For this year though, it felt rather nice to return to a more disciplined style of calligraphy, the influence of my work with Sheila Waters last month, getting back to the basics and working with a compressed foundational bookhand to illustrate the message.