Carrying the Beloved Dead Within Us 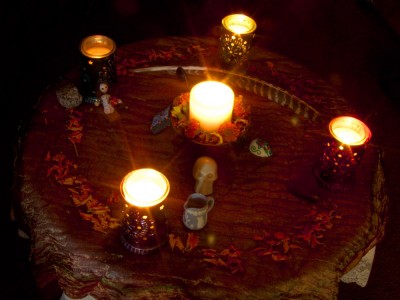 At this hallowed time of the year, the ancestors are much on my mind. They seem to draw near at this time; the veil separating our worlds becomes thin and we reach out to each other, in dreams, in ceremonies, in memory. We cast our marigold petals, festooning our Samhain altars with the sacred flowers. After today the photos of the beloved dead will return to rest in their drawers or albums until next year. But they are always with us, in some way.

This year I have been deep in the work of uncovering some patterns in my life, and find myself reaching further and further back in time, considering the lives of those who came before me, especially family. These old photos become more and more precious to me. As I grow older, those who surrounded me then seem to do so again. In this one, I am held by my father. My mother holds my younger sister within her, and my grandfather, grandmother, aunt, uncle and cousin are likely posing for Mother’s Day, judging by my grandmother’s corsage and cookware. 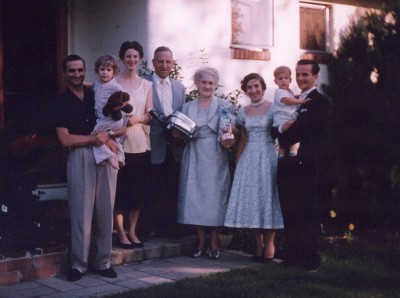 The last decades have seen astonishing growth in the field known as epigenetics. The age-old debate of nature v. nurture has taken on a new dimension as scientists investigate the measurable existence of methylation in our genetic code. In a nutshell, this gives credence to the idea that we might inherit our ancestors’ traumatic experiences as well as their DNA for straight or curly hair. A predisposition to a personality trait could be passed along, and its activation affected by the environment in which we grew up. It’s fascinating stuff, and complicated, but by studying it scientists are giving credibility to ideas that some of us have suspected for a long time.

“The universe is full of magical things patiently waiting for our wits to grow sharper.” I absolutely believe this. You have only to look at history, at things which used to be considered magical and now are understood “scientifically” to surmise that the same must be true of things we currently dismiss because we just don’t understand them yet.

Here’s to the grandmothers I knew and did not know, but still carry within me, whether I will or no.