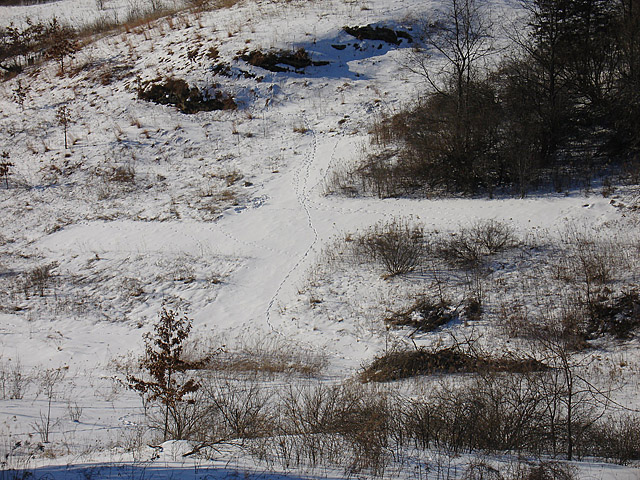 Spring is approaching. Though we may be in the depths of winter snows, today marks the beginning of spring in the old Celtic calendar. The days are perceptibly getting longer. Known variously as Brigid’s Day, Imbolc, Candlemas or even plain old Groundhog Day, the first two days of February mark the midpoint on the Wheel of the Year between winter solstice and the spring equinox. Many of us celebrate this time as the holy day of the goddess Brigid, or Saint Brigid, as she became known after Ireland was converted to Christianity. Her symbols are many, but perhaps her most well-loved sign is the equilateral cross, an ancient spinning sunwheel, traditionally woven from wheat saved from the previous fall’s harvest, or from rushes growing next to her sacred waters. Above is the most outstandingly beautiful Brigid’s Cross I’ve ever seen, and I’m permitted to reproduce it here by the writer and artist who made it, Patricia Monaghan. She lives in the snowy midwest, and says: “I should explain that we mow the prairie grass every summer to form the cross. In winter, we can just enjoy it!” The deer have left their hoofprints in the cross as they have passed by. I truly love this symbol, carved right into the land from which sprang the spiritual practice of honoring the return of the sun and the quickening of the light. 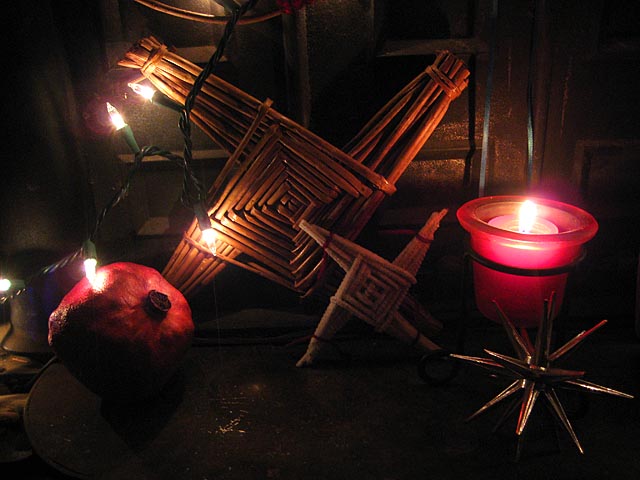 My own Brigid’s crosses are on my altar for this special time, one made from traditional wheat, and the other made from white pipe cleaners and tied with red yarn. They are flanked by the pomegranate, symbol of the Greek goddess Persephone’s descent to the underworld of winter in the fall, and the silver snow symbol of the cold still around us, and of course, Brigid’s flame. Brigid, known also as Bride, Brigit, Brigantia, Brid, Brighid, and Briginda, is believed to be the mistress of transformations: of the healing crafts, of poetry and all creativity, of weaving and spinning, and of smithcraft and the forge. St. Brigid is even said to have established a school of art, including a scriptorium where the arts of illumination were practiced and the vanished Book of Kildare, in legend the equal of the Book of Kells, was made. Brigid protects the hearth and has been invoked by women for centuries as they smoor the hearth, that is, cover the coals with ashes to keep them until the next morning when they will kindle into warmth again. She is also honored at sacred wells and waters, and it is tradition to hang a piece of cloth outside on the eve of her festival as a symbol of her mantle, to gather her blessings as she travels abroad during this time, for protection of the home. Her priestesses are known as her flamekeepers, and her holy site in Kildare became active again in 1988 after centuries of neglect and repression. Here nineteen nuns keep her everlasting flame lit, and the line between Christian and Pagan is wavery indeed. She is deeply beloved.

My own connection to Ireland is by way of my mother’s birth mother, who was Irish, but about whom I know very little. She died when my mother was only three, and my mother was fostered out to another family. My grandmother’s name was Mary, and in The Red-Haired Girl from the Bog about Patricia’s pilgrimage to Ireland, she writes that in County Mayo it is traditional that the eldest girl of the family be named Mary. So perhaps that is where my grandmother’s family came from. Brigid is sometimes referred to as being a foster mother to the baby Jesus. I feel a strong connection to her and to my Irish heritage.

What seeds quicken in you at this time of year? What will you nourish as the year’s days lengthen and the sun strengthens here in the northern hemisphere? What flame of inspiration will you tend with your daily devotion?

Addendum: Patricia Monaghan died in 2012, a year after I made this post, and the links I put to her work are no longer live. There is a lovely memorial for her at the Black Rock Institute, at this link, and her lovely book The Red-Haired Girl from the Bog: The Landscape of Celtic Myth and Spirit is still widely available. Heartfelt and well researched, this book has been a source of much Irish lore for me and many other readers, and I recommend it highly.