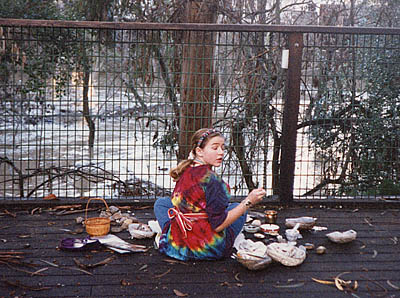 Catechism for a Witch’s Child
by J.L. Stanley

When they ask to see your gods
your book of prayers
show them lines
drawn delicately with veins
on the underside of a bird’s wing
tell them you believe
in giant sycamores mottled
and stark against a winter sky
and in nights so frozen
stars crack open spilling
streams of molten ice to earth
and tell them how you drink
a holy wine of honeysuckle
on a warm spring day
and of the softness
of your mother who never taught you
death was life’s reward
but who believed in the earth
and the sun
and a million, million light years
of being.

This beautiful poem by J. L. Stanley has been in my files for many years. This poem which I love so well was such a good match for this old photo I found recently of my own witchling daughter Chrysalis sitting on our back deck surrounded with abalone shells, incense, paints, candles, brushes, rocks, velveteen slippers and assorted magical tools. On the cusp of womanhood, she had her coming-of-age ceremony on this same deck around the same time. This photo was taken in January of 1997 as the sun was setting and the Mighty Coyote River was in full flood stage, a rare occurrence for it to be able to be seen, and heard! from the house. A time for sweet and powerful magic, taught, and learned, by her mother “who believed in the earth.”