Body of Grain, Demeter at Lammastide 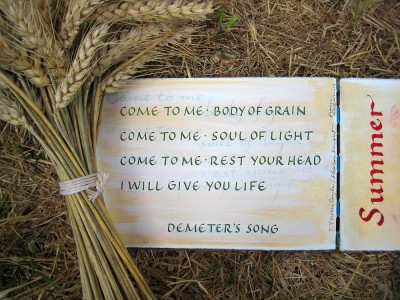 At this turn of the Wheel of the Year, we celebrate the first harvest of many to come. It is a subtle turn, here in high summer in middle California. Yet autumn is perceptibly in the air, in the shortening days and the stray coolness in the evenings. Everything is dry, dry, and seedheads are everywhere, bearing either a harvest for this year, or the promise of next year’s crop of fruit and flower.

Most especially, I am celebrating Demeter, the Greek Goddess of the Grain, the giver of agriculture, and the profound embodiment of the Earth Goddess. I think of Demeter at this time of year, though this is not traditionally her festival. The two festivals she is anciently associated with are the Thesmophoria, which was celebrated in September by only women, and the famous Eleusinian Mysteries. There are many, many stories about Demeter, thanks to Homer, Euripides, Ovid and many other writers of antiquity.

Demeter’s Song, lettered in my journal above, is a lovely chant written and recorded by Sharon Knight and T. Thorn Coyle, in Songs for the Waning Year. It is often in my mind, and being in the way of a chant to invoke one of my favorite goddesses, welcome there. 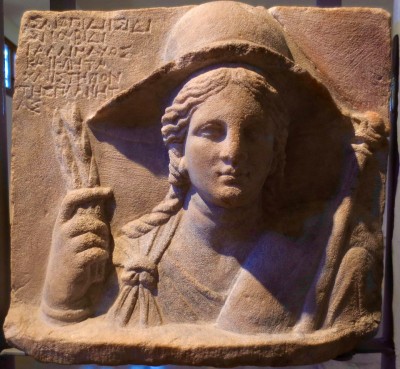 Image of Demeter by Georgia Angelopoulos, taken in 2015 at the museum in Dion, Greece, at the foot of Mount Olympus.  She is sometimes identified as Isis, the Great Mother Goddess of the Egyptians, but I believe this is a case of how gods and goddesses manifest in sequential cultures under different names, Isis becoming Demeter becoming Ceres (the root of our word cereal) in the Roman stories. Demeter is very old, and was one of the twelve first deities of Olympus. At the same time, Demeter is very current, for I feel her story of light and dark, of abundance and scarcity, of wisdom and grief. There is much, much to learn from the old stories.

Previous post: Remnants of Magic from Scraps of Art