Blessings on the Byway at San Miguel Arcangel 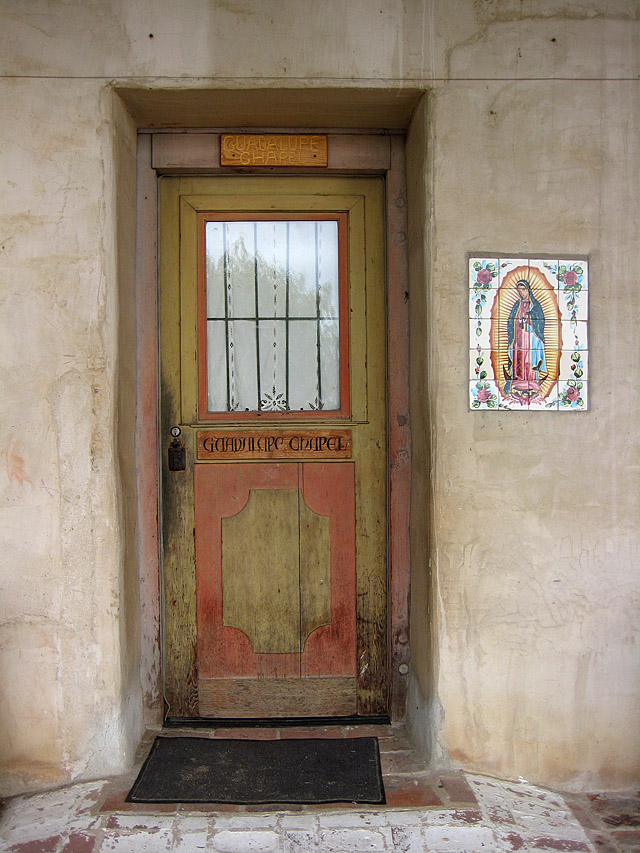 A journey through central California offered this lovely respite from driving, on a cloudy and cool Thanksgiving afternoon. We visited San Miguel Archangel, one of the California missions established by the Franciscans in the eighteenth century, each mission a day’s horse ride apart. For us, it was just off Highway 101, and we have stopped here before on this route. At the left just before entering the church was the locked doorway to the Guadalupe Chapel. 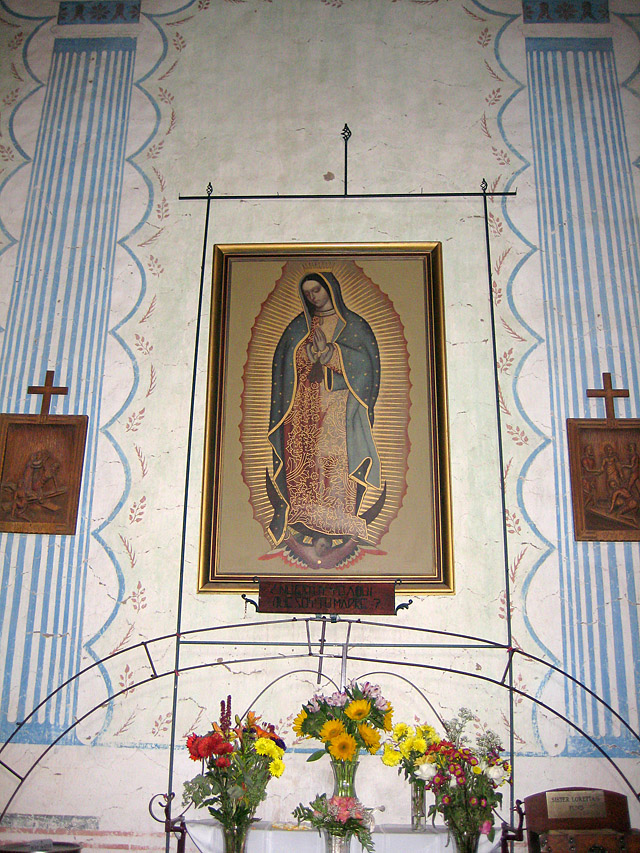 The Lady also greeted us upon entering the big sanctuary. The grounds and buildings of this mission have seen and felt much devotion for many years, and so is one of Earth’s sacred places. 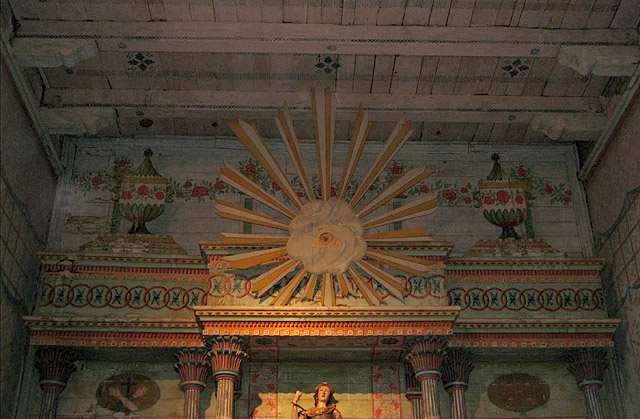 The mission is named for the Archangel Michael. Above him on the main altar is the Eye of Providence in an equilateral triangle, snugly enclosed in a heavenly cloud, gazing out over the congregants. On Thanksgiving Day, that was only we few. This eye symbol is largely associated with the Freemasons. I have not seen it in a church before. It is usually surrounded by rays of glory. All of the frescoes in this church are the original paintings done by Salinan artists. 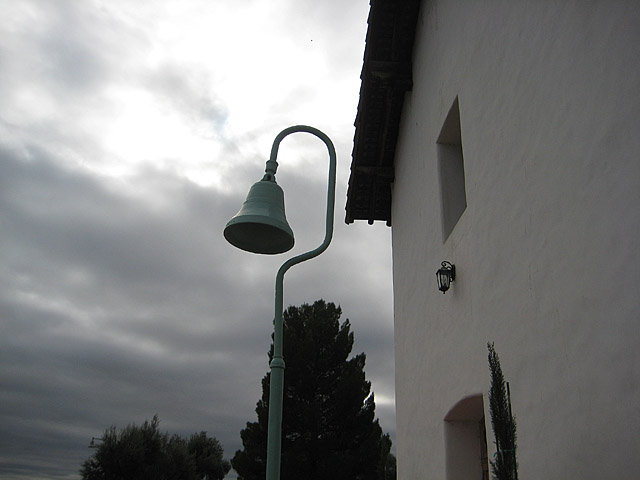 Outside one of the bells of the old El Camino Real stands sentry in the cloudy sky. These are to be seen all up and down the old road of Californio, on the highway or the byway. 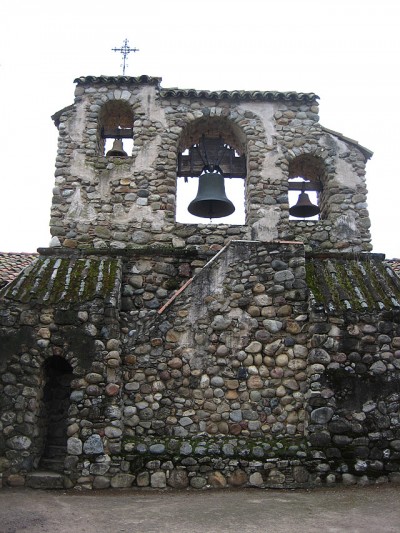 In the old cemetery stands the stone-built bell tower, with a trio of old bells. We heard the bell ringing, but it was probably a recording, since there was no one on the grounds that day. 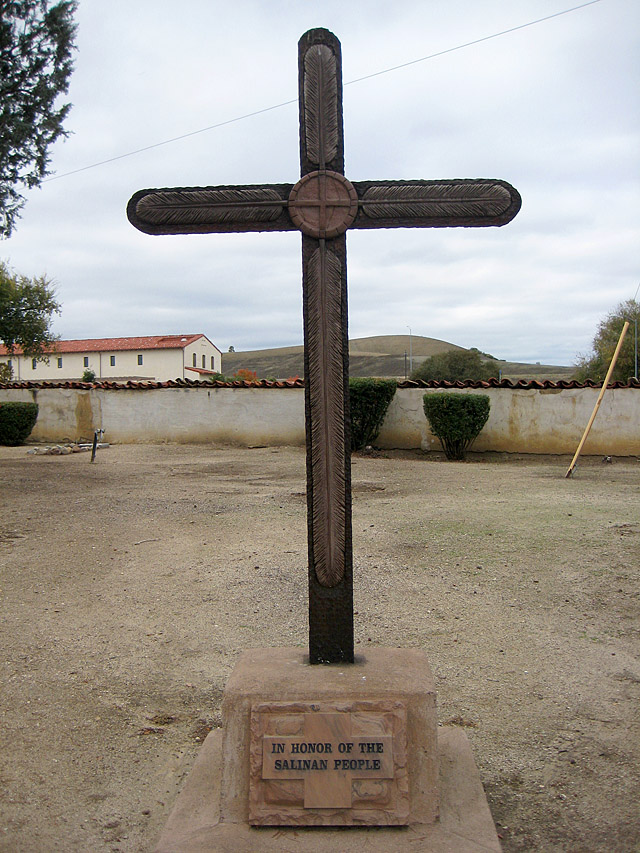 There were many ghosts there however, including many of the Salinan Indians who built this mission. At some point the church fathers decided it might be a good idea to honor them, which explains this cross in the cemetery with the feather-carved arms and the plaque “In Honor of the Salinan People.” 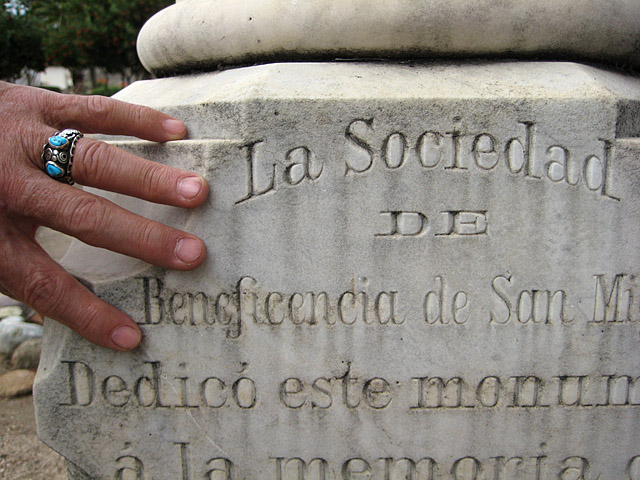 We marveled at the hand-cut letters in this marble monument, the tiny curvilinear letters surely trying the skill of the stone carver. These V-cut letters, carved in the 1880’s, are almost a lost art, replaced today by the faster but less attractive sandblasting. These letters still carry the mark of the maker. 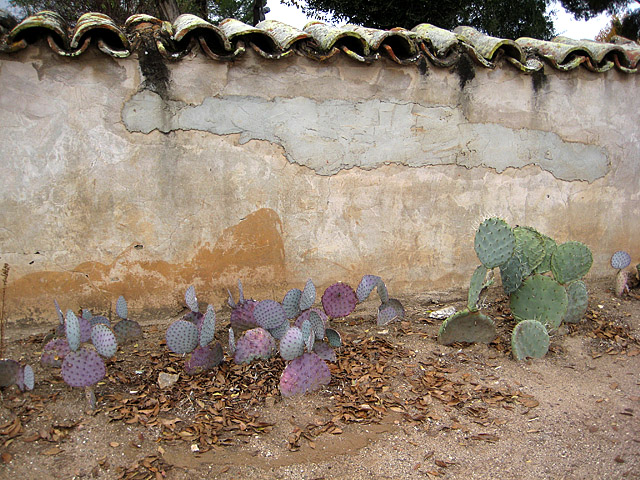 Young prickly pear cacti are a lovely shade of violet, as these I discovered by the cemetery wall. These produce the nopales fruit, a Mexican delicacy. 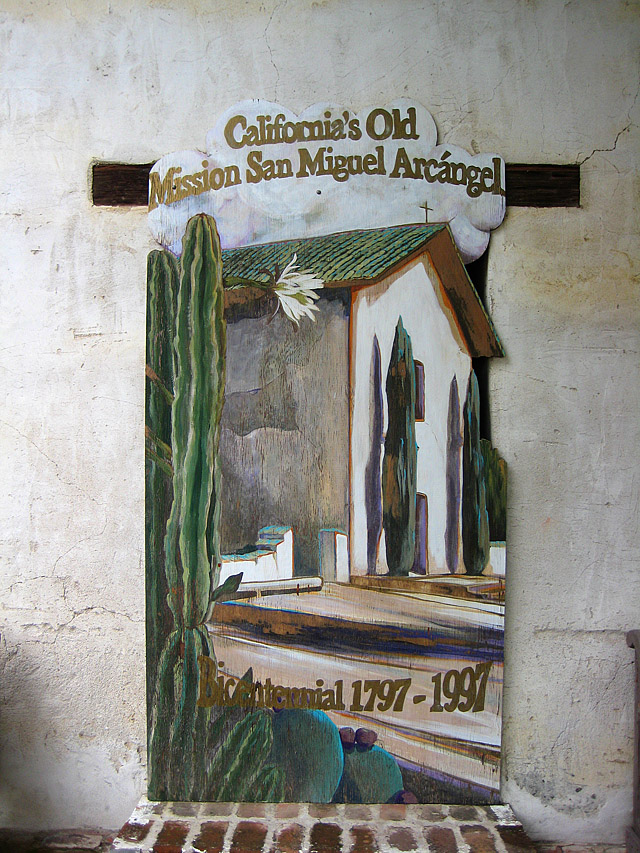 San Miguel Arcangel is over two hundred years old. Here in California, that is some real history! 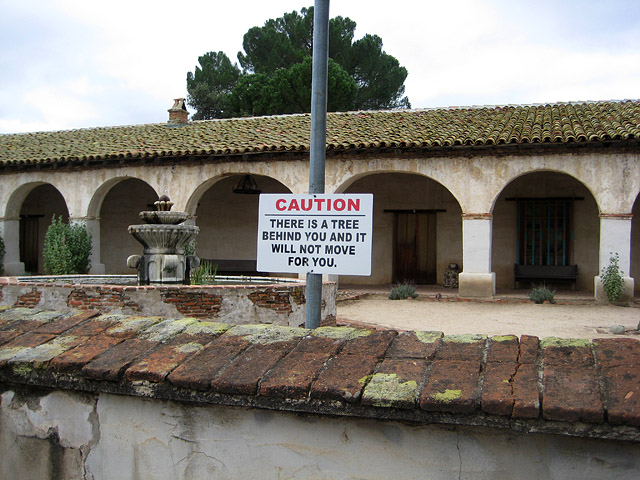 This helpful sign was posted in the parking lot to remind us not to back into the tree.

In the midst of a whirlwind two-day journey to southern California and back, this was an oasis of calm and contemplation for us. Everywhere but here was full of people; we enjoyed the quiet for a while and then moved on.

Next post: Mandala Prayer Wheels: on Special for December