Binding up a Year 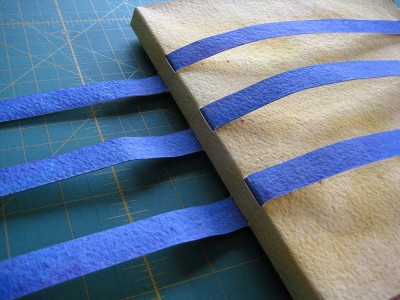 My annual journal follows its own idiosyncratic year, not the calendar. But each journal is more or less a year. Last year I had prepared the signatures, but due to a dramatic reversal in my life I was not able to bind them right away. Instead I filled one section at a time. This spring I decided it was time to bind the year, both pages and events. 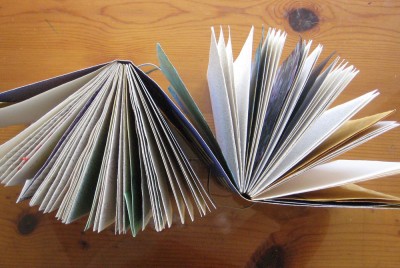 I’ve been exploring the dos-a-dos format (French for “back to back”), so I decided to also bind the journal this way. I discovered a few different orientations to bind two books into one, using a common back cover. Since the journal was sequential I chose that flow, rather than flipping over and beginning again from the other front cover to end at a common middle. If this sounds confusing, it is, and my mind was bending around the possibilities. In a sense, the binding represents an “about-face.” 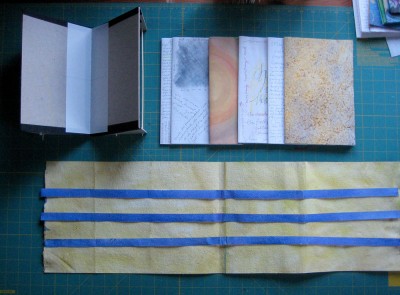 For the cover paper, I painted some heavy paper, one side yellow and the other purple, for the bright and dark halves of the year. At the start, my work area was neatly organized. 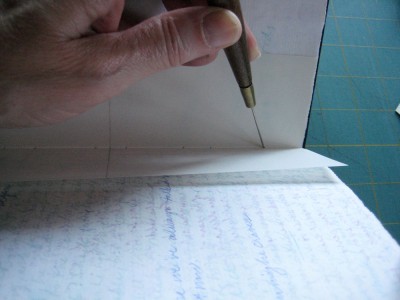 After piercing the holes in the signatures, using a sewing cradle, I stabilized each signature with clips so the holes would stay lined up. 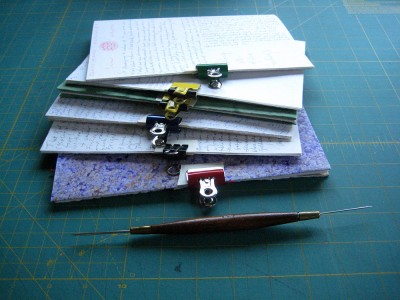 When I unclipped them to be sewn, I put T-pins through each piercing to keep the holes aligned. 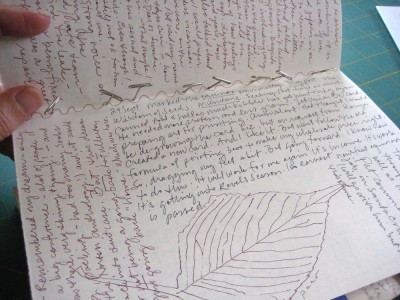 I have a long habit of recording my dreams upside down in a journal so I can find them. This year I’ve been writing every which way on the page. When I pick up the book now, I momentarily cannot tell which way is up.

My work table during the process of binding the text block became more cluttered. At top is a mockup of a dos-a-dos binding. 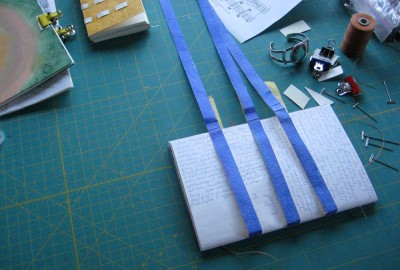 I stacked and stitched the signatures onto the paper strips, watching my scattered thoughts coalesce into a more complete form.

Preparing to attach the cover, another set of tools came into the work space. 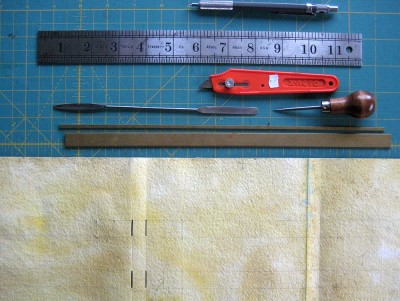 Cutting the slots on the cover paper was made easier by a sharp blade and a good awl. 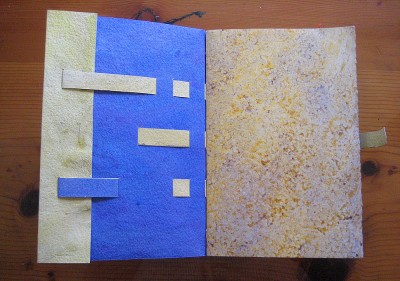 I used the sewing strips to weave the cover paper onto the text blocks. For a closure, I reversed the middle strip’s direction to wrap around each half of the book. The paper strips would not hold up for a year’s opening and closing, but for archiving they serve just fine. 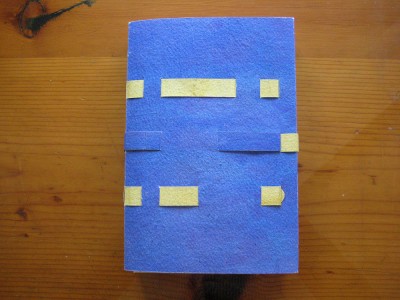 Having kept journals off and on since I was a teenager, I sometimes second guess myself. Why journal? Joan Didion explained, “I write entirely to find out what I’m thinking, what I’m looking at, what I see and what it means.” She described keeping a notebook as a place to catch “bits of the mind’s string too short to use, an indiscriminate and erratic assemblage with meaning only for its maker.” 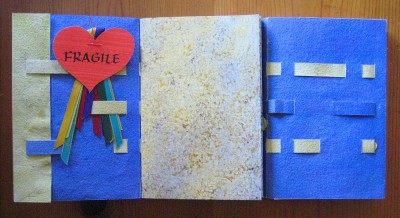 My journals have sometimes been incubators for ideas which have found their way into book art. I used to collect quotes in them, and sometimes still do, for it is pleasurable to write them out by hand. I may record bits of body wisdom or travails. The journal is my altar and my memory.