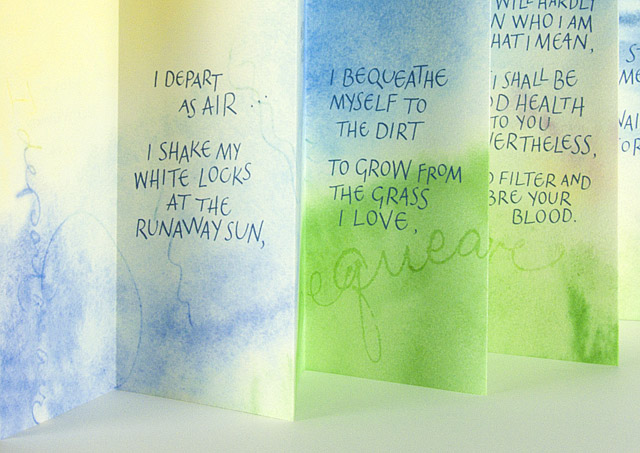 I was a teenager when I first read Leaves of Grass, probably when I was also discovering Thoreau and the transcendentalists in a high school English class. “Song of Myself” captured my attention as it has for so many others, with a voice distinctly pure and joyous. That’s Walt Whitman, and he tapped into the deeply pantheist heart of a still-young America, as well as into my own still-young heart.

This little accordion-fold book, Bequeathe Love, offers the last lines of the first poem to appear in the first edition of Leaves of Grass in 1855. Walt Whitman was 36 years old when he self-published 795 copies of his first poems. He continually revised and added to his poems as they continued to be published in many ensuing editions through 1891. The first edition was a series of twelve poems, all untitled. This poem was entitled, in the second edition, “Poem of Walt Whitman, an American,” but finally came to be known as “Song of Myself.” 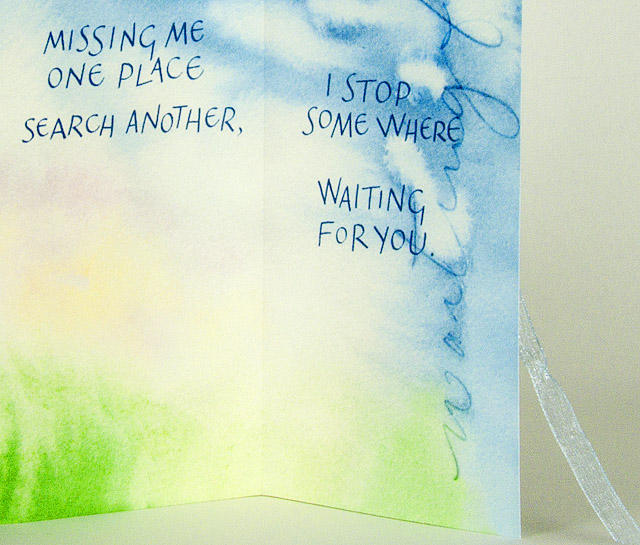 I titled this poem excerpt “Bequeathe Love” by recombining words of the poetry. Throughout all the editions, this particular poem never changed, though Whitman experimented with punctuation. I have kept the first edition’s punctuation here, though I have taken liberties with the line breaks to fit the page format. I have also made sure to include the final period of the poem, which for many years was thought to be intentionally absent to symbolize the cyclical nature of life and death that is the subject of the poetry. In later years other copies of the first edition were discovered that did have a period, and even some that showed the period pushing up against the “u” of the last word “you” before it popped out completely. In my mind, it makes sense that there would be a period at the end of this sentence that includes so significantly the word Stop. Morse code was also current in Whitman’s day: “Stop” was used to signify a period.

I hope you enjoy this modest book. I have kept the production methods and price as humble as I can to honor the poet’s own desire to “step with the countless common footsteps.” The first printing in this open edition is small, only 17 copies, using materials I already had on hand in the studio. Purchase information is here.

There is a wealth of information about Walt Whitman, but my favorite link is to this page about Whitman as the maker of books. He was involved in every aspect of the book, even setting type in the first edition. This pleases me greatly, marrying as it does the conceptual and practical aspect of book creation. He wrote, “I sometimes find myself more interested in book making than in book writing, the way books are made—that always excites my curiosity: the way books are written—that only attracts me once in a great while.” My own trajectory with books has followed a similar tangent, from college days when I wanted to be a “writer” to the present day when I occasionally write the content for my books, but also often use other people’s words to create the book I want, keenly interested in the shape of the letters and the form of the book to convey the message.

Next post: Ten years at the Book Arts Jam