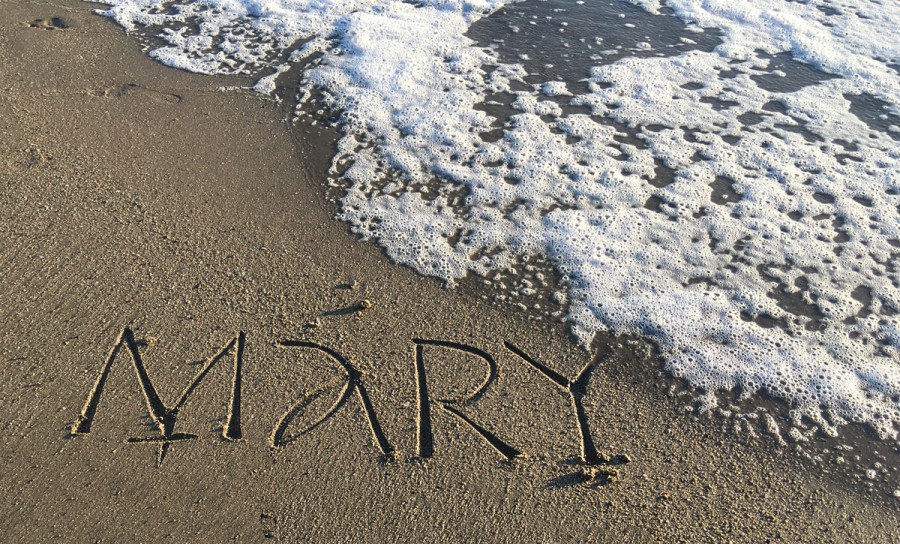 At the beginning of October, as summer turned to autumn, I took myself to the seaside. I could not resist when I heard that a class about beach calligraphy was to be held at my old haunt from college days, when I lived in a ramshackle house and could hear the waves from my room. Seabright Beach has been my destination for beach walks and nostalgia ever since. 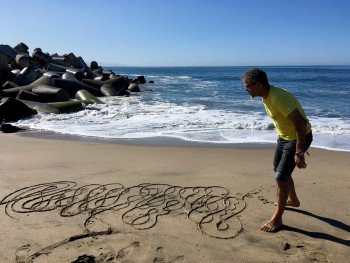 It was an opportunity to practice my craft in a new way that felt familiar and natural. Who has not carved their name in wet sand? Andrew van der Merwe came halfway across the world, from Capetown in South Africa, to teach a series of calligraphy workshops around the western United States. An accomplished professional calligrapher, he offered classes in traditional illumination and lettering everywhere he went. Within walls, the class he was most excited to teach was Rhythm and Movement in calligraphy. But whenever he could, he found the nearest shoreline and gave informal lessons in the sand. He is also a lifelong surfer who has found a unique way to commune with his beloved ocean, and has become known worldwide for mucking around by the sea, to great artistic effect. You can follow his work at @beachscriber on Instagram. 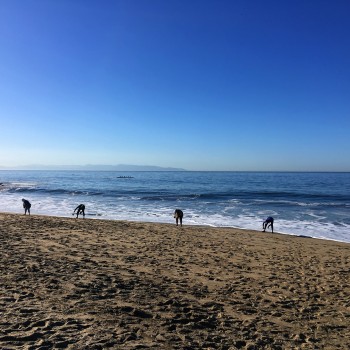 Our Santa Cruz workshop was the only scheduled beach class, thanks to our fearless leader Carl Rohrs, who arranged a proper workshop for the San Francisco guild, Friends of Calligraphy. Sixteen intrepid scribes came from four states to try their hand on the sand. Class start times were early and late, with time out midday for a siesta or a long lunch.

The weather was beautiful. The Pacific Ocean often takes the entire summer to warm up, so the water temperature is at its warmest in September and October. The breezes were quite cold in the morning and balmy in the afternoon.  In the morning I couldn’t imagine taking my shoes off, but by late afternoon I had gotten my feet wet, and gladly.

Andrew was as delightful in person as the gentleman I have become acquainted with on Facebook over the last ten years. It was a treat to meet him face to face and find him as polite and enthusiastic as he is online. When I faltered in my energy the first afternoon, he asked me, concerned, “Am I too didactic?” Pure Andrew. I had to stop and think what that word actually meant. No, I was just feeling my years for a moment. 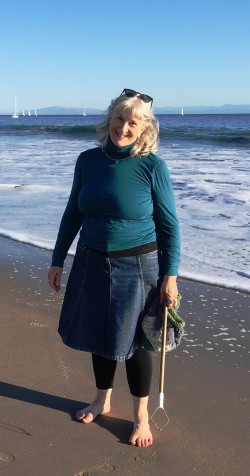 Extremes of temperature taxed my resilience, and sometimes it was hard not feel I was too old for this. I walked four miles each day, and every morning I hurt all over. It was backbreaking fun, and many discussions of proper bending posture and orthopedic challenges were heard among the participants.

On the first day I had my usual demons of doubt and disconnection – it was a short workshop so I had to get it out of the way early – and then the predictable euphoria set in by sunset and I was marking up a storm.

Andrew would have started at sunrise if we had agreed, so charmed is the light during the magic hours of dawn and dusk. He never seemed to tire. The sea air energized all of us, and I was not the only one surprised by my stamina and excitement at making marks look especially beautiful in the slanting light. Our California sand was beautifully embellished with spirals, stars, flourishes, and letters.

Andrew and Carl made the tools we used to make our beautiful and awkward strokes. I will keep mine in my car now, ready for a stretch of sea-smoothed sand. During the final hours of the class, I was so elated that I wanted to keep on going. I was making lovely round O’s, and C and M, all the letters. I discovered how to make versal shapes with the tool, swelling the stem at the base and squaring off. I was getting it! 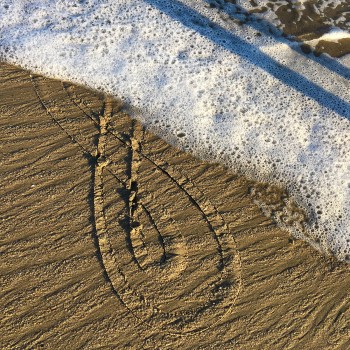 Andrew suggested at the outset that there was a spiritual aspect to this play. Just being at the sea, Mother Ocean, made it so for me. Mare – the Latin for sea, is thought to be the origin of the name Mary, one of myriad names for the Great Mother.

I let myself immerse in the elements. Air – the ever-present wind filling my lungs with the breath of life, the sea air with the magic of negative ions, and my mind with words to speak, to write, to say, say, say. Fire – the golden sun, rising and sinking, the warmth at its zenith, the golden hours early and late for the right angle of light for our marks and the all-important shadows. Water – the dance with the ocean tide, advancing, drawing back, filling and erasing all our work, leaving us with a smooth new canvas, lapping my bare feet, splashing up my legs. Earth – the million grains of sand, pounded by the waves to become the materia mundi,  the earth in its minute form. We carved our marks, were pleased with the look of them, and then they crumbled, they faded, they blew away or were walked on by people and dogs. The sea took it all, careless of our art, again, again. Nothing lasts but the elements. 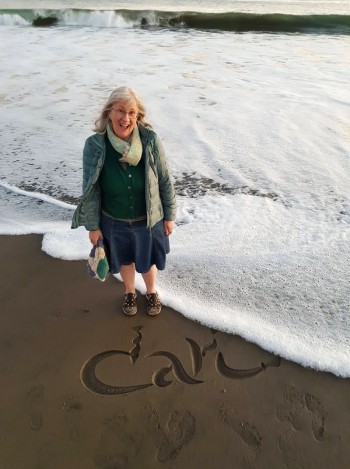 At the end of the second day, Andrew became a dervish, running hither and yon to carve every person’s name in the sand and then make a photograph of each of us as the water came in to wash away his gift. I shivered with delight when I felt the wave touch my foot, and my name.

I stayed on the sand until the light began to fade, not wanting to let this amazing interlude end. It was a communion not only with the elements and our art, but also with the other souls who share this obsession with the beauty of inscription. But in the end, my back said no more, my hand gave out, and it was over.

As the sun sank into the western sea, Andrew was still dancing. The sand flew as he spiraled down the shoreline, on to the next creation, the next mark, the next happiness. I asked him as we parted if he ever got tired, for he had been going nonstop, as far as I could see, the entire two days. He laughed and replied, “Joy is strength!” 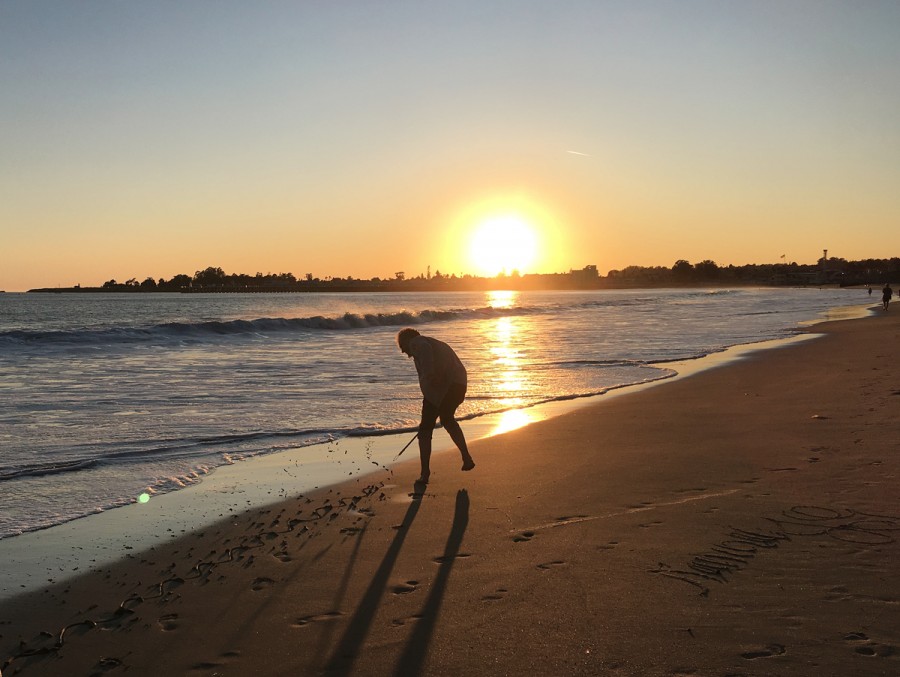