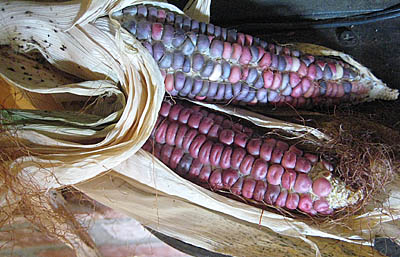 Today marks the autumn equinox here in the northern hemisphere of our beloved Mother Earth, with equal parts of day and night. It is also the full moon tonight, a true harvest moon. I believe she is shining her reflective light on whatever needs balancing in our lives.

For me this season is never without sorrow, because it was just about now that my mother died, nineteen years ago. Yet it is also the season of joy, because it is the time of my sister’s birthday. The wheel turns, the reaper comes to harvest with his scythe, and out of the brittle husks of grief new life is born again. It was always thus, and will always be so.

Nineteen years ago was the true beginning of my understanding of the natural ways of the world. It was also an initiation of sorts for me, for it was I who acted as a priestess for my mother’s memorial service. There was no one else to do it, for she did not wish to belong to a church, and yet her passing needed to be honored and marked for all of us left behind. I really had no idea what to do, but managed a gathering of friends and family; some spoke of her life, some wept; some were mute with grief. 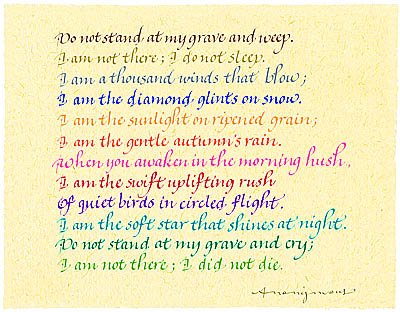 Yet that day I was also given a wonderful gift. A dear friend stood up at the service and read a poem that I had never heard before, but which resonated deeply with me. And later my six-year-old daughter asked me if I would please write it out in calligraphy for her. It was the only thing that made any sense to her that day, and I wrote it in colors from dark to green, with every color of the rainbow in between, because my mother loved color. Later still I made it into a sympathy card and it has continued to speak to many who find comfort in its words. In my days and nights of mourning I would often go outside with a candle and sit with the trees and creek and the wild creatures, and talk to her. That is where I found her, and that is where I began to realize that my Mother was still all around me, and I could talk to her whenever I needed to. 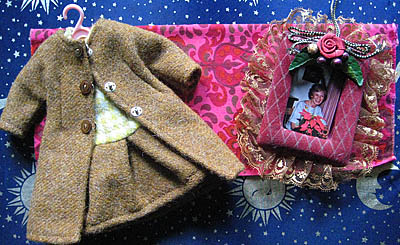 This summer I was going through some old boxes to clear out space when I came across my old Tammy dolls. In the case was a cache of doll clothes my mom had made for my doll. This wool outfit with the dropped waist and matching coat was a miniature duplicate of one she made for herself in the sixties. She was an outstanding seamstress and was sometimes told she could wear her clothes inside out, for they were as finished on the inside as on the outside. I also found a little doll dress of the first dress I ever made for myself at age 12. She taught me to sew and for many years I too sewed most of my own clothes. This year on the anniversary of my loss I made this little tableau with the dress and a favorite photo of her, her bright spirit shining through, and though you can’t see it, an angel floating above her head, at someone’s house for a Christmas dinner. Underneath is a piece of the bright fabrics she used to make her clothes from. I miss her still.

Though the attribution on this printed card is Anonymous, I have since discovered it was written by Mary Elizabeth Frye in 1932, the same year my mother lost her own mother.