An Interview in Oz 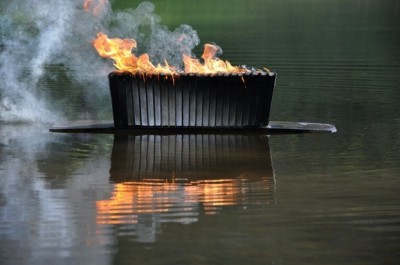 I was fortunate last month to be interviewed by Australian calligrapher and bookmaker Rhonda Ayliffe for one of her blogs, calligraffia. This blog is devoted to all things calligraphic worldwide with an emphasis on the scribal work being done in Australia, but the links alone are worth a visit. The image above, though, is taken from Rhonda’s personal blog, art and etc and I wanted to use it because it so captures the maverick spirit of this adventurous bookmaker and scribe. Besides raising a family with two young children who take up quite a bit of her time, she manages to create innovative and startling bookworks, as well as maintain a very large garden that in other countries would probably qualify as a farm, and in fact is also in the process of starting up a dairy with her husband and so has a nice herd of cows to take care of too. Oh, and as if that weren’t enough to keep her busy, she has just completed a comprehensive course in permaculture to make her family able to sustain themselves independent of “the grid”, and is about to open a new publishing venture called sams creek bookworks. No, she doesn’t go in much for capitalizing letters, but that is part of her charm and this English major can just get over it. All of these ventures are linked at her art and etc blog in the right side column. Oh, and in her spare time she pursues advanced degrees in art! Rhonda’s work is usually “pushing the envelope” and this photo is only one example of many fascinating things she does with books, often found as discards at library sales.

So, though we are divided by a hemisphere and some age difference, she feels like a kindred spirit to me, being a creek girl like myself, living on a farmlet (well, mine is a farmlet, I think hers is more of a farm), raising two fabulous children (though mine are grown and hers are small, they all seem equally brilliant), and somehow producing a lot of interesting art in the middle of it. Honestly, I thought I should be interviewing HER, instead of the other way around, but I was honored to share some of my working process with her, and the effect blogging has had on my connection with other artists around the world. 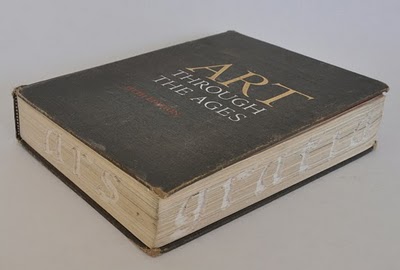 Oh, and the other little connection we discovered was when I saw this piece of her art, an old copy of Art Through the Ages, her high school textbook, into which she had carved ars gratia artis (art for art’s sake). Now this is commonly known as Gardner’s Art Through the Ages, but for many years it was edited by Dr. Richard Tansey and his wife Luraine (uncredited), who lived right next door to me for decades. In fact they were very encouraging to me in my early artistic endeavors and I have very fond memories of them. Rhonda’s encounter with their book was somewhat different. As a young person, she was unable to find within its pages anything representing her gender or her continent. And so later on she didn’t hesitate to carve on it and turn it into art itself, from her own unique point of view. I know for a fact that any mention of female artists that made it into the later editions of that book were thanks entirely to Luraine’s unrelenting pressure on her husband to include the women, for she was an accomplished artist herself and also unafraid to speak her mind.