An Influential Piece of Calligraphy 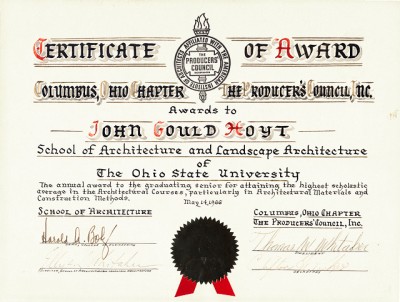 This traditionally engrossed diploma is a piece of calligraphy from my personal past. When I was in the second grade, my father decided to improve his career and went back to college to get a degree in architecture. For the next five years, he went to school full time and worked full time. Sometimes on weekends we would drive around and look at different kinds of buildings and houses. His academic performance was stellar enough for him to receive this special award from the Producer’s Council upon his graduation from The Ohio State  University, in 1966, with a degree from the School of Architecture and Landscape Architecture in the College of Engineering. He graduated on June 14, and what I mainly remember was the sight of thousands of graduates throwing their mortarboards into the air in the OSU stadium, a very jubilant event! 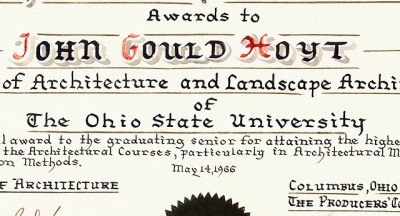 This award had actually been given to him a month before. Years later, examining both of his framed diplomas from The Ohio State University, I suddenly realized that this one was completely made by hand, unlike the “boilerplate” one issued by the university. Columbus was the home of the Zanerian School of Penmanship, founded in 1888 and the most famous school of penmanship in the country. This calligraphy is a fair latter day example of this style of calligraphy, with its heavy-footed engrosser’s bookhand and medieval influences in the title lettering. The shadow effect under the top lettering is a technique straight out of the still-available Zanerian Manual of Alphabets and Engrossing, done by turning the paper sideways and using the rinse water to create the shadows. 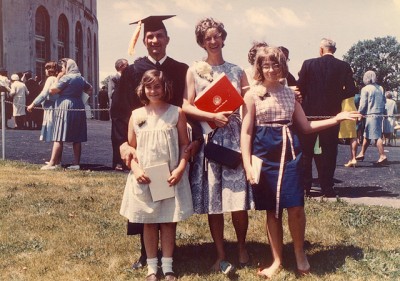 This family portrait taken on the day my dad graduated shows my mom holding that diploma as if she had earned it (and certainly she contributed mightily to his success by managing the home while he was earning a living while completing a five-year course of difficult study). Here also you can see the unrealized scribe at age twelve, mindful of my handwriting but much more intent on learning to sew as well as my mother, wearing the first dress I ever made for myself, and striking a smart-aleck pose. That year, my dad was a grad, and we were all pretty happy about it.