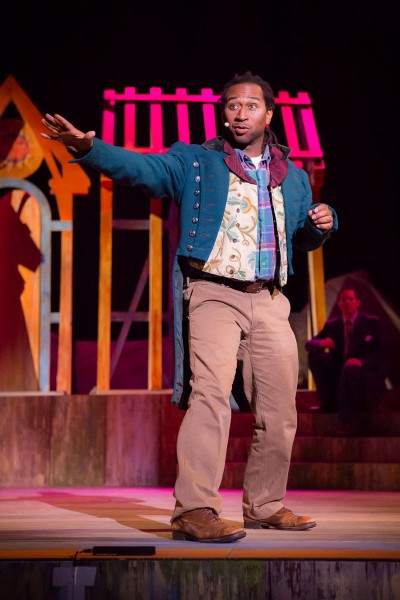 “Crossroads: An American Journey” is perhaps the most profoundly emotional of all the California Revels shows I’ve seen at the Scottish Rite Theater in twenty-two years. I expect it is because this year the Revels comes home, and presents an American folk Revels that rings deep in our hearts. It is full of songs we know. I have loved all the cultural journeys Revels has offered in years past, but this show is like an old friend.

Feeling this way was heightened by the experience of walking the few blocks to the theater through streams of protestors on the streets of Oakland on the day of the Millions March on December 13. The ongoing actions in response to the miscarriage of justice about the recent police killings of people of color are unlike anything I’ve seen since the sixties of my youth. Thousands of people have spilled into the streets, to walk in solidarity, chant, and carry homemade signs. Seeing this brought me to tears, before ever entering the theater.

So I watched the show from that frame of mind, and heard music that was a balm to my soul. Revels is about building community, not debating social justice issues, but it was impossible not to hear echoes of the unrest outside the door of the theater in the songs of our history, which often have been birthed from the labor and protest movements.

The narrative this year is a loosely strung together tale of an Everyman, Johnnie (Rene Collins), who we meet at a crossroads, in 1933, the midst of the Great Depression. Johnnie is lost, from himself and his land, and he meets a Mysterious Stranger (Kevin Carr) who gives him a compass and sends him off in the four directions to seek what he must find. The narrator (James Galileo) explains: “It’s all about looking for the light in dark times. It’s about findin’ your way when you feel all lost. It’s about figurin’ out who you are when you’re not quite sure. It takes place, like a lot of these stories do, far out in the middle of nowhere, at a place where two roads cross.” This is pure Revels: a journey, a dark time, seeking the light. 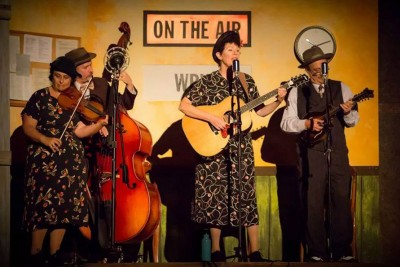 And right away the music melds with the story, with a few verses of “Goin’ Down the Road Feelin’ Bad” presented by the wonderful American roots music group Euphonia, and accompanied by Shira Kammen on fiddle. This old-timey song, also known as “Lonesome Road Blues,” was sung often by Woody Guthrie as one of his “Dustbowl Ballads.” We hear the melody of hard times: “I don’t want to be treated this a way.” The set for the musicians is an old radio studio, where the newly invented art of broadcasting made songs more widely available and heard during the 1930s.

Johnnie travels first to the north, where he abides a while with the Shakers and witnesses their ecstatic dancing and lovely shape-note tunes. Then he heads south to New Orleans where he hears Cajun street calls and stories, a bit of voudou magic, some charming waltzes and fervent hymns, and a long story sequence involving a fearsome Bluebeard, his sharp-tongued wife, and some fleeing lovers. 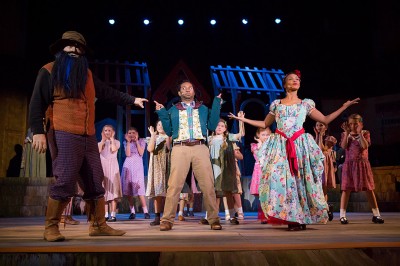 Here Johnnie meets Zozo La Brique (Tristan Cunningham), who he soon remembers to be his wife, and together they travel to Appalachia in the second act. Now the story gets positively homespun, as the essential “songcatcher” nature of the Revels is revealed in every song and dance. Songcatchers in the early twentieth century traveled the eastern mountain communities and transcribed all they could of transplanted English and Celtic folk songs, before the advent of radio and later broadcasting began to homogenize the culture. Soon the stage is filled with clog dancers, and a “dumb show” (another name for the traditional British mummer’s play). 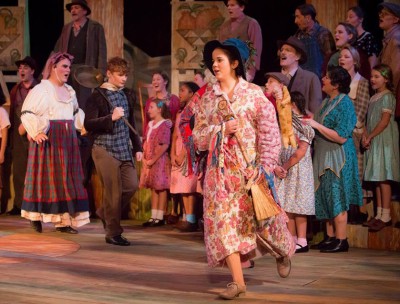 There is some mighty intricate dancing. 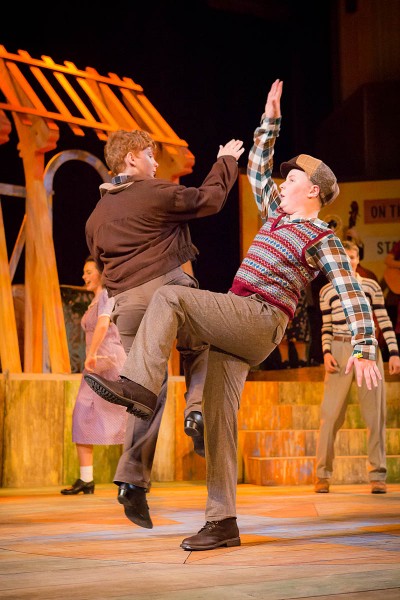 And the sword dance, a mainstay of the mummer’s play for its symbolic enactment of death and rebirth, is danced by the  young performers in a fresh presentation. 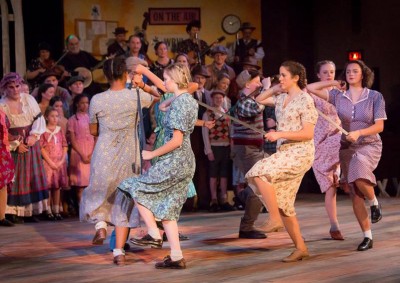 Other highlights of the show are a pristine presentation of “Simple Gifts” by the children’s chorus, which leads into the traditional “Lord of the Dance” which ends the first act, and which uses the same melody. And a heartbreakingly beautiful arrangement of “Shenendoah” brought nearly everyone to tears.

The show’s era resonates for many in the audience as well as the cast and chorus, for these songs are all mixed up with our grandparents and family memories. That the seeker in the narrative is African-American is incidental to the story as presented, but poignant when considering the larger social landscape of the 1930s and today. I watched performers of all skin colors tell this story and it didn’t matter a whit what color they were. It wasn’t about that. It was about our shared history, or as was so cleverly remarked, “His story? Her story? Our story!” Our history is a meld of European and African influences, and many many others.

The story winds up with a Carolina waltz, a square dance, and finally Woody Guthrie’s “This Land is Your Land” which everyone in the theater sang too. It may not be remembered that this was originally a protest song, since the last three verses are usually excised from the rest of the feel-good lyrics, but in a nod to current events, the chorus finished up with one of Woody’s more forthright verses:

By the end of the show, Johnnie is reunited with his family and his land, through discovering the songs and stories of the four corners of the country. The Stranger tells him that the last direction he needs to go now is the fourth direction, “the future” which coincidentally is the West. I like to think of this future as a place where we can all remember that the land is “a sacred trust, whose purpose is the well-being of all its inhabitants.”

Because of the familiarity of the songs, and because it is the dark time of the year when we come together to generate the most powerful aspects of our culture, this was a restorative experience. Everyone at some moment shed a tear or two for these songs, and there were many hand-to-heart moments. It was a journey into our collective past, and as the Mysterious Stranger said to Johnnie at the end of the show, “if you want to know who you are, it helps to see where you’ve been.”

For the duration of the show, we all felt a bit more knitted together. I’ll wager that this production generated more post-show conversation in my family than perhaps any other Revels show we have been to, as we tried to figure out why we were weeping so much, why so affected, why so moved. Theater gives us a place to process our feelings, a bubble where we can suspend our disbelief for a little while and enter into a safe place to feel the uncomfortable feelings, and maybe find some redemption and solace in the experience.

There are five more performances this coming solstice weekend. Do your heart a favor and get on down there to see and hear some of our story.