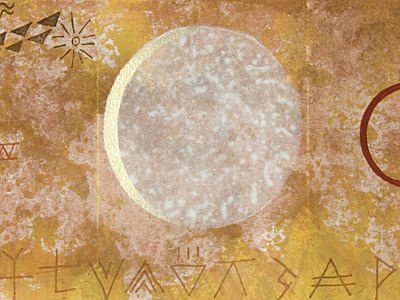 If “Letters are things, not pictures of things,” as Eric Gill wrote, then even our seemingly phonetic-only letters can be seen as rich with symbolism and story. I’ve uploaded photographs of a new book work, Alphabet Ancestors, to my website. This series of three books traces the roots of our “modern” Roman letters (well, we have been using the same capitals for two thousand years), to cultures that flourished 5,000 to 7000 years ago in Eastern and Mediterranean Europe. Known also as the Vinca or Danube script, these linear forms and marks served our Neolithic ancestors as a writing system, though indecipherable to us now. Marija Gimbutas called it “sacred script” and wrote, “Old European writing was associated with religious functions.” These marks, some of them in rows separated by lines, were incised into clay or stone, on ritual objects such as vessels, spindle whorls, and female figurines. Their monoline forms stand in ancestral line behind Etruscan, Minoan, and runic forms of northern Europe. 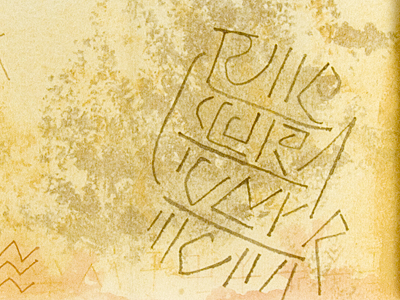 Intermixed with these signs are images drawn from nature that can be seen as the first shapes, including bones, moons, trees, thunder, breasts, snakes and spirals. 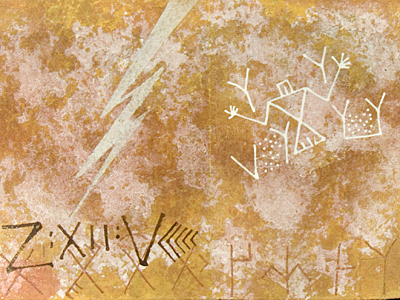 The Roman majuscules for Alphabet Ancestors stand in unfolding relation to the ancient inscriptions and forms. They were drawn from classic Roman Trajan letters with their distinctive serifs for the first book. The second and third books used Sumner Stone‘s font Magma as a model. Stone’s interest in pre-Roman lettering also led him to design the font Numa, which has several of these old forms. Stone wrote an excellent article about his development of these two fonts, and a third san serif uncial font called Munc, in the last issue of Alphabet, the journal of the San Francisco Friends of Calligraphy.

These ancient inscriptions are an expression of some of the earliest forms of human consciousness in Europe. My previous work with these marks include The First Writing and Goddess Alphabet books, as well as the first book I adapted these forms into an alphabet style for, The Charge of the Goddess.

The form of Alphabet Ancestors, a continually unfolding accordion, has echoes of the scroll structure. I first encountered this accordion form, in an “aha” moment, as an advertising mailer for a magazine (The Sun) and saved it for several years until I could translate it into these book forms. It seemed a wonderful way to juxtapose the ancient and modern marks.

For more about “Sacred Script” visit the Library here.