A Page from the Past 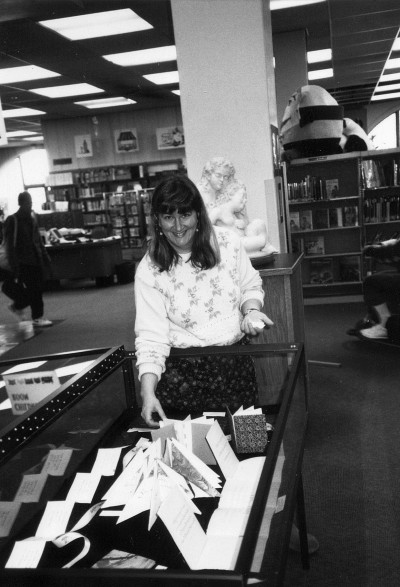 Here is a little flash from the past. In 1993, I put together an exhibit of books made by members of my calligraphy guild, Pacific Scribes, and included a selection of historical manuscript pages. I wanted to show the unbroken line between current scribes and those from long ago. I also included some “tools of the trade” – pens and antique inkwells. 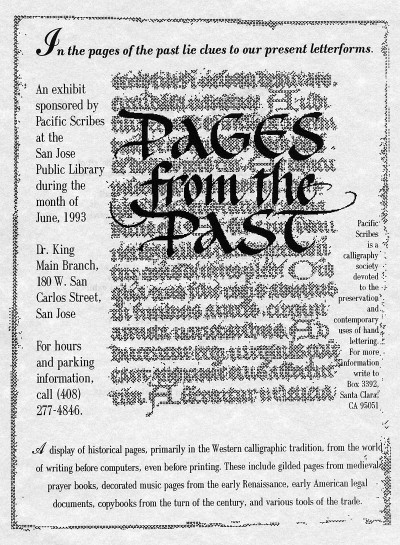 I made this flyer on my computer. I was so proud of it! In 1993, I had an early Macintosh and Pagemaker, and apparently no idea how to get a clear image with my scanner. I actually didn’t mind the intense pixelation that occurred when I scanned and placed this old manuscript page in the document. It was fuzzy, yes, but I thought it was pretty arty. I was pretty chuffed with mounting my first exhibit at San Jose’s downtown library; all history now, as the library has moved and this old building is gone.

Even back then, I was fascinated with calligraphy in books. I don’t believe I had any such work in this exhibit. I was still resisting bookmaking, for I knew once I started I would never want to stop, and that is exactly what happened about ten years ago when I began making books in earnest and taking less jobs on commission. Presently I am back to being a jobbing calligrapher for a little while, but I have bookwork waiting in the wings that I hope to share before the summer is out.