A Labyrinth in a Book 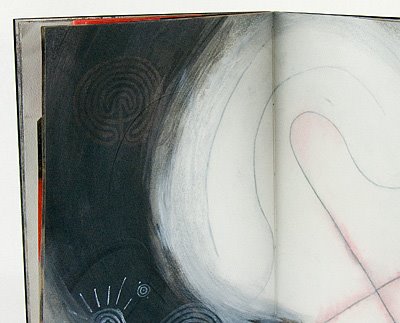 The labyrinth has other symbols within it: the cross, the spiral, the arch.

Above is a detail of a page spread from my book Portal. I began work on this book at Ghost Ranch in northern New Mexico in June of 2007, and finished it by end of summer in my studio in San Jose.

It was a radical idea to consider making a book without words, but I am so glad I did. It shook out parts of my brain that are commonly occupied with words. These images speak powerfully to me, but since they were made by ancestors who didn’t leave a written record of their meanings, their symbolism is open to interpretation. I believe this Cretan labyrinth is the oldest known labyrinth design, so its roots would be in even older marks. Concentric arches appear painted on cave walls, and carved in stone inside ancient passage tombs at Newgrange in Ireland, and Gavrinis in Brittany. This 7-circuit labyrinth, as well as the simpler 3-circuit one, is found stamped on coins from the pre-Greek Minoan civilization at Knossos on Crete. 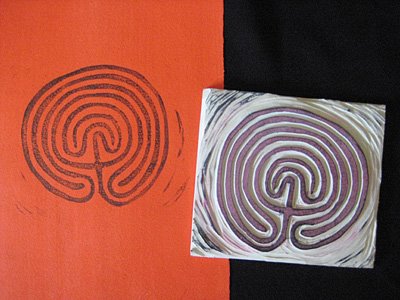 The second picture shows the labyrinth rubber stamp I carved for this book. Working with this method was fun as I had never quite got the hang of rubber stamps before. A simple set of carving tools from the art store and some Nasco Safety-Kut for block printing and I was pretty well set up. I think I stamped the image with thinned gouache or acrylic paint. On the book page above you can see where I stamped it black-on-black, which gives a nice dimensional effect when you move the page.