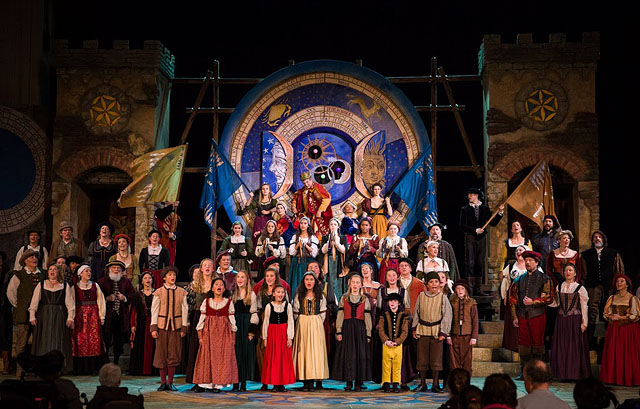 Sunday evening I had the communal pleasure of being enveloped in the magic that is a Revels performance. This has come to be the crowning activity of the holiday season for our family, always much anticipated. The Revels are tradition bearers who bring the past to life to cast a light in the joyful present. This year was no exception as California Revels presented a finely tuned story of three Celestial Fools in a medieval Italian town, a crossroads of travelers from all over western and eastern Europe. The Fools enact a story of the Sun, the Moon and the Stars, their theft by Death and their rebirth and replacement in the skies. The three Fools provide the levity and basic story line of the show, all of them extraordinarily talented clowns who keep us enthralled throughout. Below, the three Fools juggle their respective spheres. 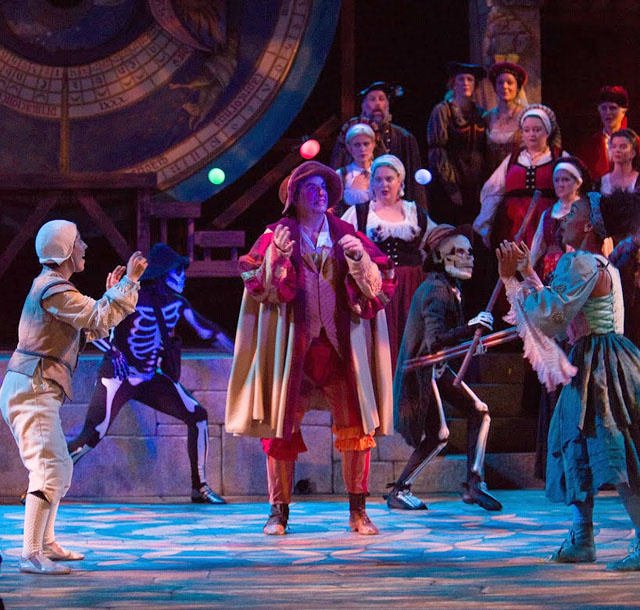 The beauty of Revels is the enlivening of the old stories and songs of the past. In an increasingly “globalized” world, these become ever more precious, as they stir our souls with memories of our ancestors for whom these stories were a way of ordering and celebrating their world. It is important that these threads of connection not be lost, and there is nothing like the Revels family to keep that thread of connection still woven into our modern lives. Balance is achieved by this melding of past and present as we look to the future of each new year. 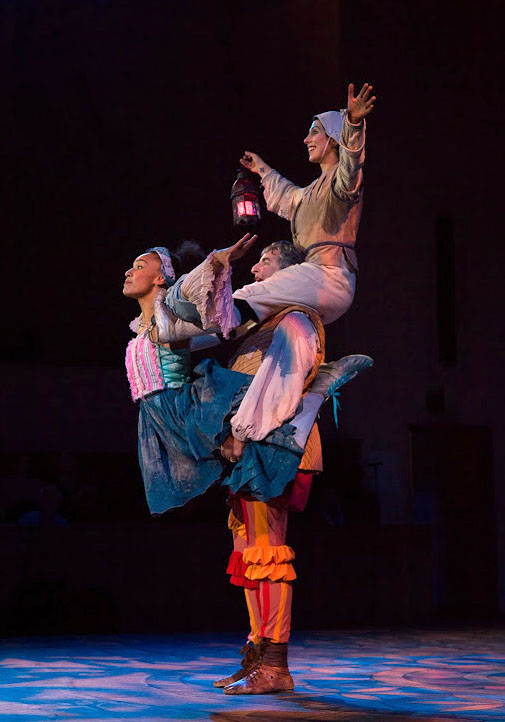 There is always plenty of storytelling in Revels; here the Star tells the children the story of La Befana, that fearsome old woman who nevertheless bring treats to the children at Twelfth Night. 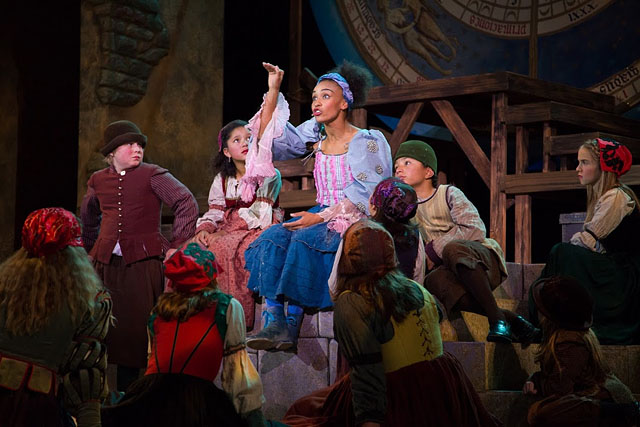 La Befana then appears as a masked tap-dancing witch who whirls around with her broom, cleaning, cleaning! 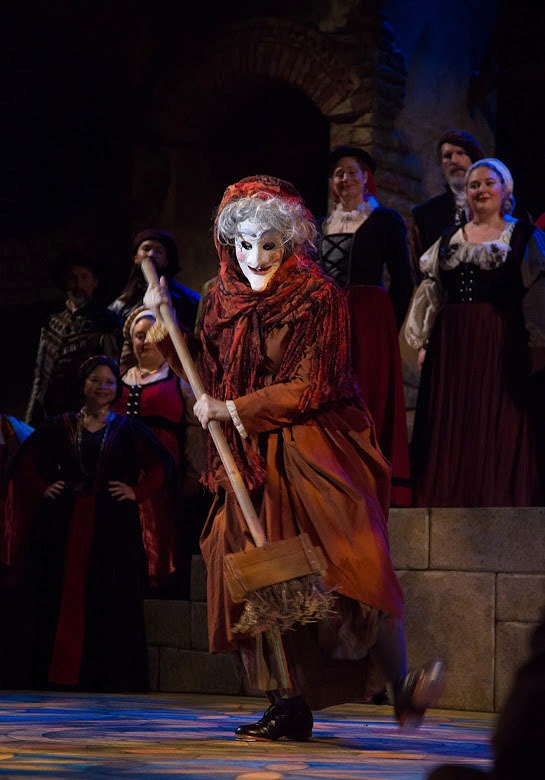 In the second act mummers play, Death stalks the Sun, a theme that can be found in stories all over the world at its darkest time. 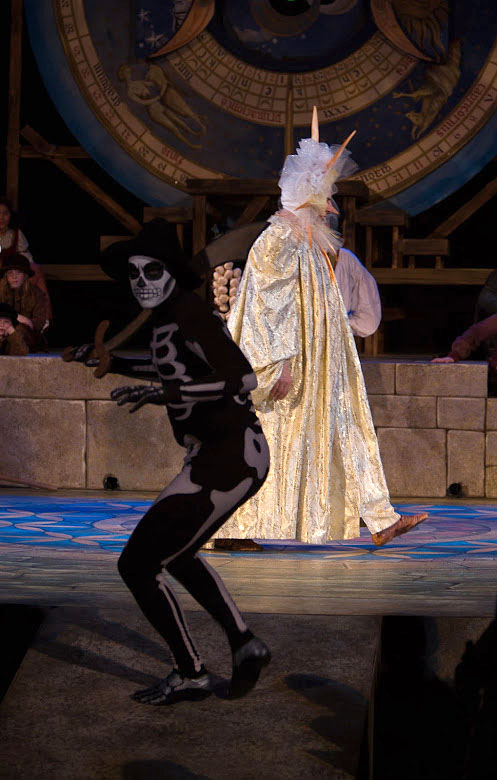 There are splendid costumes and beautiful music of many cultures present in this show: the old tradition of the Lord of Misrule (chosen from the audience to be crowned and “rule” over the proceedings), a beautiful setting of O Fortuna from The Carmina Burana, a lively tarantella dance, the singing of Dona Nobis Pacem – the entire theater singing it at the end in a whisper – and haunting Balkan tunes brought by the True Life Trio and their drummer, here also accompanied by Revels mistress of music Shira Kammen on her fiddle. 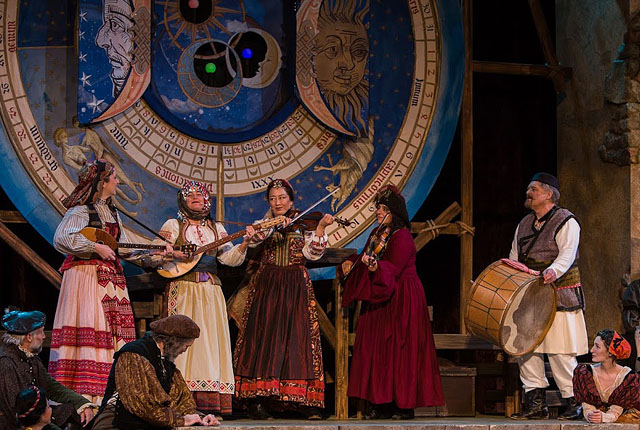 The beautiful blue and gold set piece, designed after the calendar illuminations in the Tres Riches Herues du Duc de Berry, one of the richest and most treasured of medieval manuscripts, made this scribe’s heart go pitter-pat. 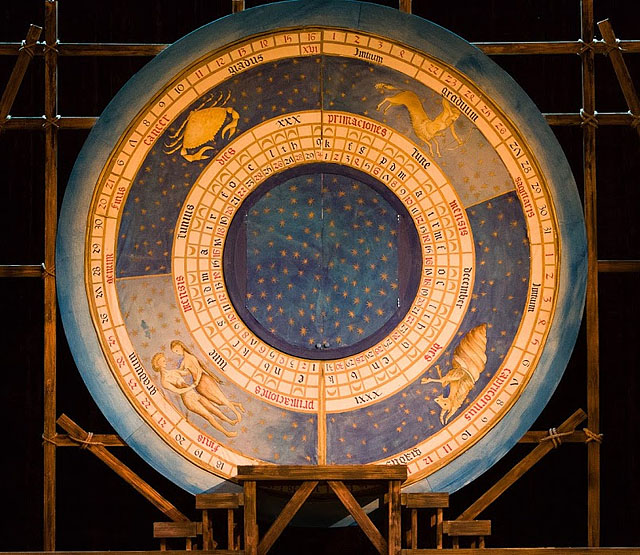 In About Revels, Elizabeth Lloyd Mayer, former artistic director of Revels, suggests that Revels is more than a theatrical performance. It is liturgy of a very special sort, not confined to one religious tradition, but a pageant woven of many strands both secular and sacred, loosely strung together for the purpose of celebrating in community. All manner of folklore and myth make their appearance and make us feel connected to what might be called European indigenous tradition. The roots of Revels are English: most of the familiar and beloved songs  and traditions – morris dancing, the Sussex Mummers’ Carol, the Lord of the Dance, the Abbots Bromley Horn Dance – have English roots and appear every year in every show of the ten or so being produced across the country. Yet over the years Revels has also ventured further into western and eastern Europe, to Tibet while exploring the Silk Road, and to American shores as well.

“Family” is indeed the relevant term for this group of singers, dancers, musicians, actors, clowns, set designers, carpenters, costumers, makeup and special effects artists, puppet makers, and all the myriad volunteers who give so much of their time to make this show happen year after year in many cities across the United States. We have been attending this show now for twenty-one years, since our own children were small. Now our daughter is working backstage as the makeup designer, another young friend has joined the chorus, and the tradition goes on. The connections that are felt between those who participate in this event, whether as producers or audience, feels like family. Generations attend together, sharing in the joy and laughter and beauty of Revels. We REVEL together, for it is in coming together at the darkest time of the year that we reaffirm our humanity and feel the turning of the great spheres which mark time, in all seriousness and in all mirth. By the end, I am fairly overcome with emotion and can only listen while the house sings the Sussex Mummers’ Carol to finish the show, the words brought out on giant banners so everyone can sing along together, one last time until we meet again next year. Welcome Yule! 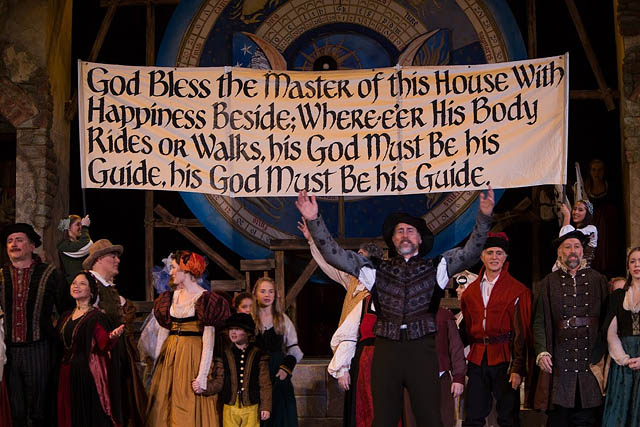 All photos by Charles and Janet McMillian, used here with many thanks! Our wonderful Fools this year were Jeff Raz as the Sun, Mahsa Matin as Luna, and Tristan Cunningham as Stella. Death was played by James Galileo. Song leader (pictured above) and musical director is Fred Goff , and the Artistic Director is David Parr. Much gratitude to countless others!